Turkish Father is Thankful to This FFIS Host Family for Taking Such Great Care of His Daughter!

International students aren’t the only ones who are nervous about traveling so far from their familiar home and culture to study at the University of Oregon.  Their parents also worry, since they are too distant to be able to quickly lend help and support should their child encounter difficulties.

FFIS’ home stay program is much more than simply hosting incoming international students for a few days to help them acclimate to America, Eugene/Springfield, and the University.   FFIS volunteers usually become interim parents, offering ongoing advice and assistance for the student they’ve hosted.

That warm welcome and hospitality alleviates not only the students’ fears, but also those of their parents back home.  This letter to the FFIS Steering Committee from a father in Turkey helps to illustrate how impactful the home stay program can be.

To the Steering Committee of the Friendship Foundation for International Students,

My daughter is an exchange student at the University of Oregon from L’Université Lumière Lyon 2, France.

I am writing this letter to express my sincere gratitude to your organization for doing such a great job for the incoming foreign students. Having graduated from a high school in her home country Turkey, my daughter started her higher education in France in the fall of 2016. It was a big event not only for her but also for us, the parents since it was the first time she left the family to live alone in a foreign country. But we were content with the feeling of her being only a few hours away in a place not so unfamiliar to our “little” girl.

Last year when she decided to go to the U.S. for a year of exchange, it was a much bigger event for us. The U.S. was so far away when you look from this part of the world.  We had no possibility to reach her in a few hours or days if she needed us. I knew things there were different: the systems, the tastes, the looks, the layouts, the behaviors, the thoughts, sizes, habits, namely every little thing would be new and require an adjustment. We didn’t know what her new life would offer her: happiness or not. Namely, the situation was uncontrollable, novel and unpredictable.  As parents, we had every reason to feel stressed.

Luckily, we had a host family in Eugene coordinated in advance by your volunteer organization. The moment Mr. Dan Kaye met my daughter at the airport upon her arrival and Mrs. June Brooks welcomed her at their sweet home with warm heart we said goodbye to our parental worries.

During the week of orientation at the University, June and Dan became her new parents and eased her entrance to a new life, which could have been very hard and difficult otherwise. They give a pleasant and sincere environment, so she never felt left alone or abandoned.  They guided her through the City and the University, so she never considered that she was a stranger or lost.  They provided some of the stuff she needed at her apartment and showed her where to get more, so she learned that the coming days would be easy and simple. 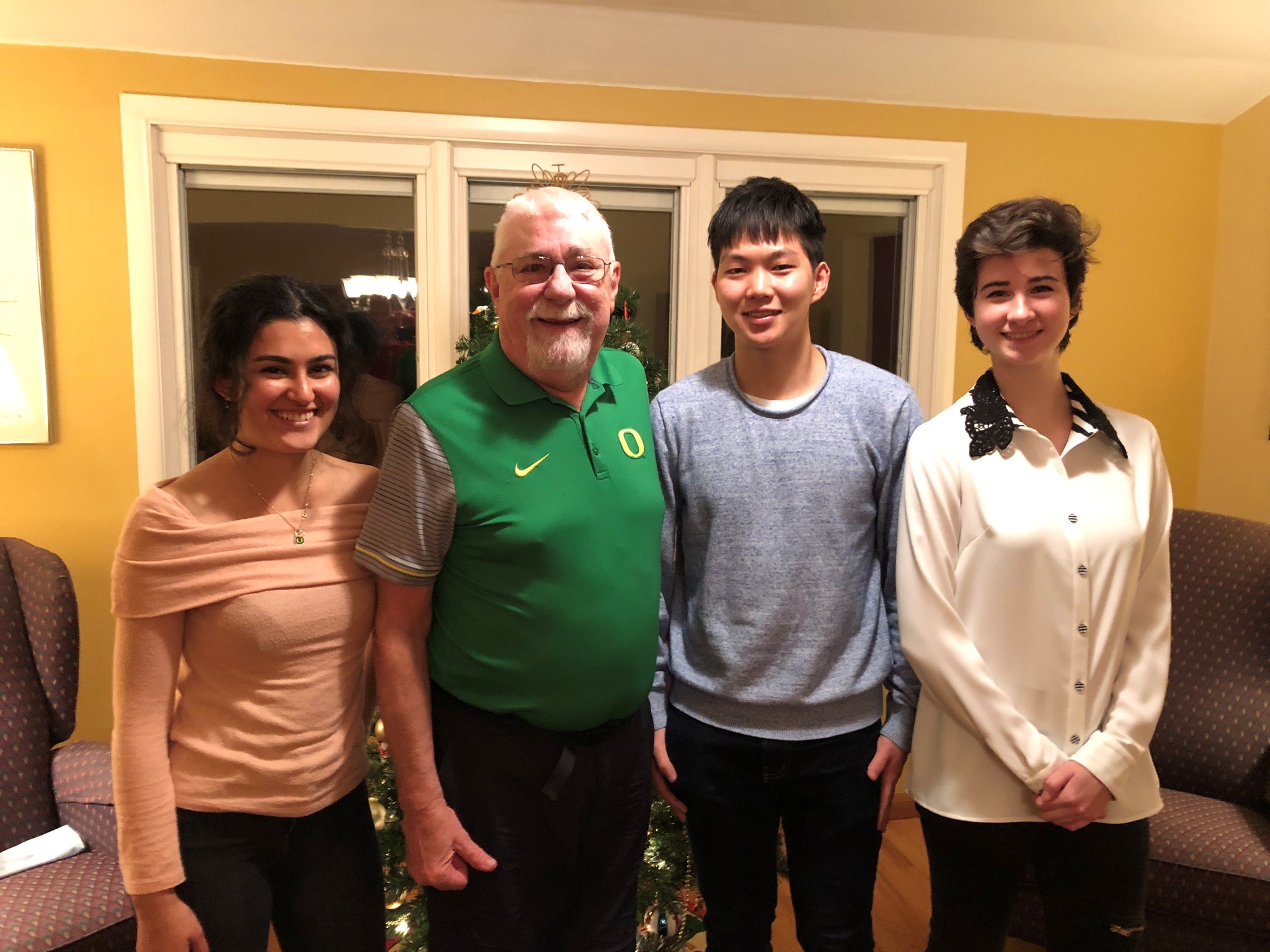 Not only in the first week, but June and Dan also continued their parental role in the ongoing months. They kept in contact, met occasionally at breakfasts or dinners, and never missed special occasions like Thanksgiving or Christmas tree decoration that “families” typically got together.  You can imagine how we took a breath knowing how comfortable she was at a distance of ten thousand kilometers away from us and that our co-parents were giving a safe and secure environment to our daughter.

Maybe, Oregon Ducks, the U.S.-wide famous football team of the University characterizes the unity of the City and University. I was shocked when my daughter told me that at the opening night of the football season, the Autzen Stadium audience was close to 60,000 in attendance.  The UO is a big part of the City itself and every Eugenean is a Duck. This unity provides a safe environment and trustable people for the students. UO most definitely must be one of the best choices for exchange students and parents.

Actually, the Friendship Foundation for International Students is the proof of the paragraph above – a group of Eugene volunteers working for the benefit and well-being of international Ducks.  Your efforts are appreciated by parents from all over the world. Thank you.